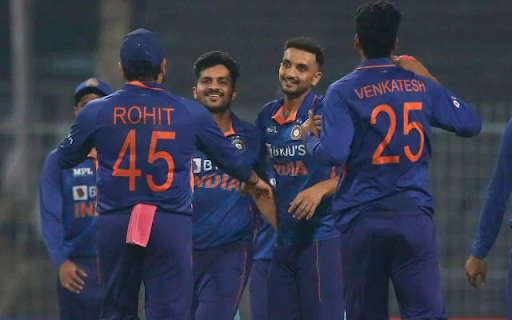 India has climbed to the top of the ICC T20I team rankings after a 3-0 thrashing of the West Indies. Rohit Sharma's team has surpassed England to take the top spot, with the Men in Blue now matching the top rating of 269 points. However, India's 10,484 points are ten points more than England's 10,474. It should be emphasised that India is the top-ranked T20I team for the first time in six years, and they should be proud of their achievements.

Despite putting up a valiant effort in each of the three matches, West Indies could not win any of them. On Sunday (February 20), India won the third and final T20I by 17 runs, completing a 3-0 clean sweep.

Suryakumar Yadav was selected Player of the Match and Player of the Series for his unbeaten 31-ball 65 in the previous game. Apart from him, all-rounder Venkatesh Iyer, leg-spinner Ravi Bishnoi, and fast bowler Harshal Patel also performed admirably throughout the series. Nicholas Pooran and Roston Chase performed admirably in the batting and bowling departments in the West Indies.

Pakistan (rating of 266), New Zealand (rating of 255), and South Africa (rating of 253) round out the top five teams. Despite a 4-1 series win over Sri Lanka, defending T20 World Cup champions, Australia is still in sixth place with 249 points.