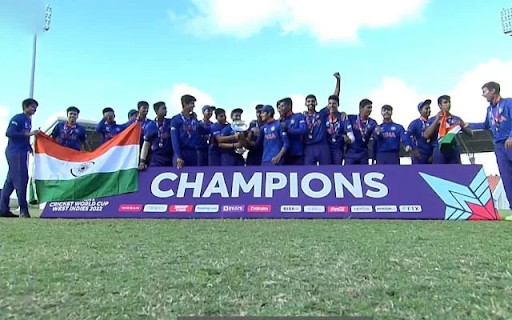 The India colts performed at the ICC U19 World Cup 2022 in the West Indies. They not only won but also maintained their unbeaten record throughout the tournament. The teenagers maintained their composure, particularly during the knockout stages, when everything looked to be slipping away from them, and they ended up performing the unthinkable.

Messages of congratulations began to flood in from India and around the world after the Boys In Blue put on a magnificent performance in the Caribbean. The Board of Control for Cricket in India has also awarded them monetary advantages for their efforts.

Now, the next generation of cricketers has returned to the country with the most significant award in junior cricket, having defeated England by four wickets in the summit showdown.

The Yash Dhull-led side returned to India after winning a record sixth U19 World Cup. On Tuesday morning, the team boarded their aircraft home from the West Indies, passing through Amsterdam and Dubai before landing in Bengaluru. According to reports, they will now go to Ahmedabad later in the day, when the BCCI plans to hold a felicitation event for them on Wednesday.

In the U19 World Cup, the colts showed a lot of grit and commitment. They defied all odds to win the global championship. The Hrishikesh Kanitkar-coached side experienced a significant setback in the early stages of the competition when three of their key players, including skipper Yash Dhull and promising batter Shaik Rasheed, were found to be positive for COVID-19 and had to miss a few group stage games.

Despite this, the entire team demonstrated incredible tenacity, and their never-say-die mentality helped them win the competition. All eyes will be on this week's IPL 2022 super auction in Bengaluru following the felicitation event. It remains to be seen how many of those young stars will be signed by the 10 clubs for the premier tournament's 15th edition.