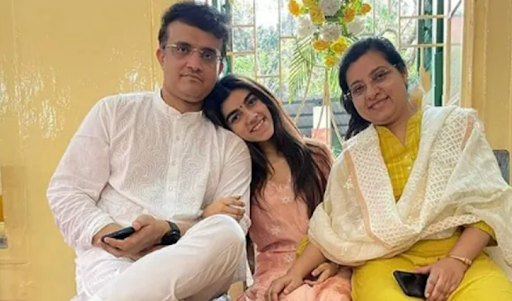 Sourav Ganguly, the President of the Board of Control for Cricket in India (BCCI), and four members of his family, including his daughter Sana Ganguly, have all tested positive for COVID-19.

Sana Ganguly and the other members of the family are asymptomatic and living in seclusion at their home. Dona Ganguly, Ganguly's wife, tested negative with COVID-19.

A few days ago, Ganguly tested positive for HIV, and he was hospitalized at Kolkata's Woodlands Hospital. Before being released, he had Monoclonal Antibody Cocktail Therapy and has been isolating his house ever since. If he tests negative for the Omicron variant, he will be kept in isolation for ten days before stepping out.

Ganguly had a hemodynamically stable condition. He was maintaining a 99 percent oxygen saturation on room air.

Ganguly's health has been deteriorating for over the years. He had a heart problem last year and had to undergo angioplasty surgery, as well as the insertion of two stems into his two arteries. Ganguly's ailment is thought to be inherited, as he is currently stable on both fronts.

On the other hand, according to the Saurashtra Cricket Association (SCA), former Saurashtra cricketer Ambapratasinhji Jadeja died here on Tuesday owing to COVID-19. Jadeja was 69 years old at the time.

The SCA stated that everybody in the Saurashtra Cricket Association is affected and grieved by the death of Ambapratapsinhji Jadeja, a former cricketer from Saurashtra. They added that he died early last Tuesday morning at Valsad after a long struggle with Covid-19.

He was a retired DSP from the Gujarat Police Department.

Former BCCI secretary Niranjan Shah expressed his condolences. He sent a message stating Jadeja was a fantastic player with whom he shared many memorable cricketing moments. He wrote that may Jadeja’s honorable soul rest under the Almighty's protection.