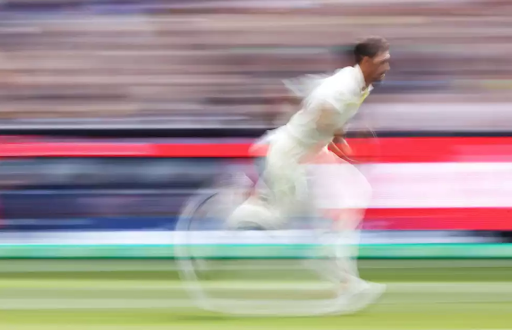 However, given the circumstances and the environment, it was understandable. With Joe Root on strike, this was the hat-trick ball. Mitchell Starc sped in with the wind at his back and tens of thousands of screaming Australians behind him. This was the last act of a dramatic triptych that he'd set in motion by dispatching Zak Crawley and Dawid Malan with his previous two deliveries. As Starc approached his delivery stride, the seats thudded and the voices swelled in harmony. Rarely has a crowd of 42,000+ witnessed a delivery that blasted over the outside-edge and into the wicket-palms keeper's with such ferocity. Root would have felt every bit of the collective energy from every non-Englishman there at the MCG heading his way, aside from the evident relief of having missed it. As fantastic as it was to be there in person, it was also something you'd want to see and savour later in private.

That could be said of Starc and Pat Cummins' entire 12-over burst, which was followed by Scott Boland's own Boxing Day Test moment with the double-strike in the penultimate over of the day. It was one of those occasions when the MCG transformed into the 'G, the world's most thrilling cricket arena. It had been building all day, especially since the start of the final match, when the Australian tail was forming key partnerships.

Between 5.20 and 6.30 p.m. Melbourne time on Monday (December 27), there was a slew of nominations for the scene that epitomised the evening's intensity. The first pass from Cummins to Haseeb Hameed nearly hit him in the head. The time when the Australian captain had Crawley nicking after he had repeatedly thrashed his bat. Starc's angled deliveries grazed the edge of Root's bat and sailed beyond the slip cordon. The Boland delivery to get Hameed out. When their hometown hero went towards them following his successful over, the Bay 13 regulars erupted in applause. Or, for that matter, Root picked up a stray newspaper that had blown into the MCG's centre, along with all the other litter, and debated the crossword with umpire Paul Reiffel in the midst of the chaos.

To give England any hope of keeping this season alive, Root would have to turn it on one more time during a calendar year that has been governed by his bat. And how perfect it was when the England skipper stood alone in the centre of the MCG cauldron, waiting for Ben Stokes to meet him for what seemed like an eternity, a lone champion waging a lone war against the old enemy's ever-growing strength. It was an image that perfectly encapsulated the summer.