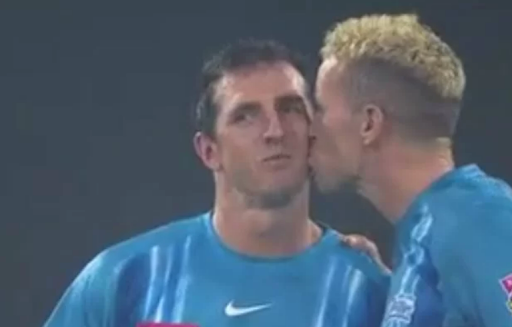 Cricket fans have been thoroughly pleased by the ongoing Big Bash League (BBL), which has seen some entertaining action across the 22-yard line. While players like Josh Philippe and Glenn Maxwell have made headlines with their bats, Andrew Tye and Zahir Khan have taken wickets. Audiences, on the other hand, saw Daniel Worrall and Peter Siddle's on-field bromance on Tuesday.

Siddle kissed Worrall on the cheek, and the video quickly went viral. The event occurred at the Sydney Cricket Ground during a match between the Sydney Sixers and the Adelaide Strikers.

Worrall was given the first over. Adelaide Strikers Captain Siddle was fielding inside the circle, defending 147 at the site. After bowling the first ball, the right-arm pacer spoke with Siddle before bowling the second.

As Siddle smiled and kissed Worrall on the cheek, the two appeared to be having an interesting chat. His captain's gesture was likewise acknowledged by him. Needless to say, the video of the incident quickly went viral as viewers weighed in on the couple's romance.

In terms of how the game has unfolded, the coin has fallen to Adelaide's advantage, as Siddle has chosen to bat first at the SCG. Jake Weatherald and Matthew Short, the Strikers' openers, were removed inside the powerplay overs.

Matt Renshaw and Jonathan Wells both got off to a good start, but neither of them was able to make an impact.

Adelaide's standout player was Thomas Kelly, who struck a 34-ball 41 to keep the ship afloat. The lower order, on the other hand, was unable to contribute much, and the Strikers were reduced to 147/8 in their allotted 20 overs.

All-rounders For the Sixers, Sean Abbott and Daniel Christian made the ball talk by taking three wickets each.

The Strikers needed some early wickets in the powerplay overs with such a low score on the field, which they did not get.

To shock the defending champs, the Strikers will have to bowl very efficiently from now onwards.