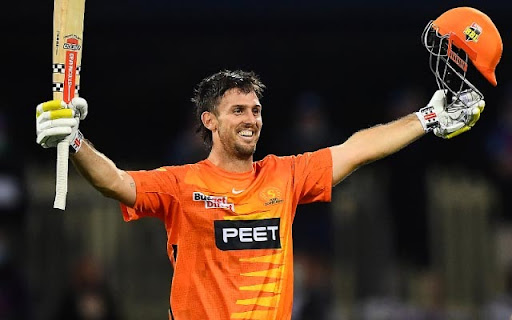 The Perth Scorchers overcame the Hobart Hurricanes by 53 runs, thanks to Mitchell Marsh's immaculate century, which set the tone for the opponent team.

After earning the bat flip and batting first at Blundstone Arena, the Scorchers reached 5-182 from 20 overs, with Marsh blasting 100 from 60 balls.

Marsh hit six fours and five sixes en route to his first BBL century to get the Scorchers off to a good start.

In the opening over, the Scorchers' first man out was Colin Munro, who was caught for a duck off Joel Paris' bowling.

At the midway point of the Scorchers' innings, Ashton Turner blasted one six on his way to 17 before hitting Scott Boland down Ellis' neck to make it 4-74.

Laurie Evans had a sensational cameo, smashing 40 off just 24 balls before being caught by McDermott off Ellis and Marsh leading the Scorchers to a massive total.

The Hurricanes' chase got off to a rough start as Matthew Wade (4) hit a fly ball to Kurtis Patterson for the fifth pitch of the inning.

After being caught LBW by Tyman Mills in the second over, Caleb Jewell (2) was the next man to return to the dugout.

Josh Inglis trapped Harry Brook for 1 off the bowling of Peter Hatzoglou.

Peter Handscomb was caught by Munro off the bowling of AJ Tye for three runs, extending the home side's dreadful downfall.

Before being caught by Marsh off Agar, D'Arcy Short struggled with timing in his 31 from 29 balls.

Nathan Ellis only managed one run before being bowled by Mills for a score of 7-88.

Tim David reached 17 with a four and a six before being caught by Behrendorff, giving AJ Tye his 100th BBL wicket.

Before being stumped by Inglis off the Bowling of Agar, Scott Boland struck two fours on his route to ten runs.

Paris was the Hurricanes' final man out, caught by man-of-the-match Marsh off Turner's bowling to give the Scorchers their third win in as many games, extending their flawless start to the BBL11 season.