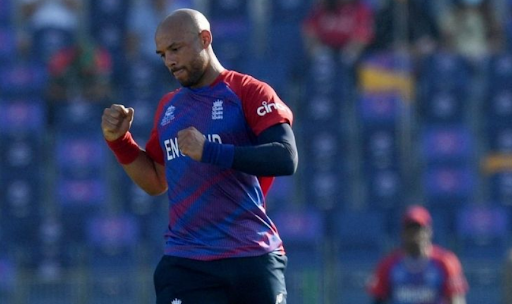 Tymal Mills has sustained yet another injury in his career, and he could miss the present T20 World Cup as a result.

Unfortunately, the team now has a health issue to deal with. With seven wickets under his belt, Tymal Mills is the team's joint-highest wicket-taker in the competition. England, on the other hand, has already entered the semi-finals and thus have the luxury to take their time deciding on him.

Mills was hurt in the previous game, which took place in Sharjah, facing Sri Lanka. Mills stopped sprinting while throwing the fourth ball in the event's 14th over. He was compelled to leave the stadium because he was obviously in pain. It's thought to be a quadriceps injury, but it'll take English physicians 48 hours to diagnose it.

Mills last appeared for his country in 2017 and was called up to the World Cup team as a result of his outstanding domestic season. His journey has been littered with injuries, the most serious of which has been his back. The English bowler has been limited to playing only one type of game as a result of his ailments.

Last year he had a stress fracture in his back and had to wear a brace for over three months. He did, however, make a strong comeback this season. Mills took 17 wickets in the T20 Blast, compared to eight wickets in the Hundred. His capability to bowl beautifully at the end of games earned him a place in the World Cup.

On the other hand, England's reserve has Tom Curran and Mark Wood, neither of whom is a death-over expert. Mills' slower balls and diversity make him a fantastic death bowler. Reece Topley, a left-arm pacer in the backups, will be called up if Mills is unable to continue playing in the World Cup.