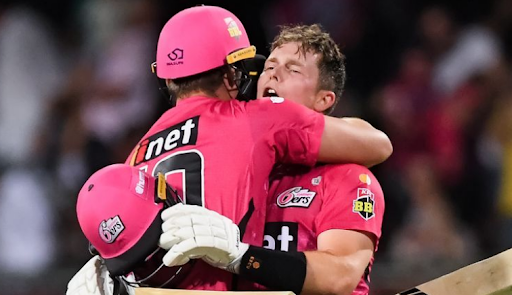 Sydney Sixers secured their place in the Big Bash League final with a dramatic and controversial four-wicket triumph over Adelaide Strikers in the Challenger. Hayden Kerr hit a scorching 98 not out from 58 balls.

The Sixers needed more than 11 runs per over in the final five overs of their chase to win, and even after a match-changing 55-run stand between Kerr and Sean Abbott (41 from 20 balls), they needed 12 runs from the last over at the SCG.

They lost wickets in the next two deliveries, with Jordan Silk, despite a hamstring issue, getting off to a good start with a single before Kerr smashed the next ball for six and the easy two that followed left the Sixers requiring two from the final delivery to win.

The Sixers then requested that Silk retire hurt, much to the Strikers' chagrin, so that they might have a healthy runner at the non-end. Although no rules were breached, it may be argued that the spirit of the game was violated.

After a slip in the deep, Kerr blasted the penultimate ball through midwicket for four to send the Sixers into the final, where they will face the Perth Scorchers on Friday.

The Sydney franchise's drama began before the game even begun, when opener Josh Philippe was ruled out late in the game after testing positive for Covid-19. With only 12 players available and the BBL blocking a second effort to reintegrate Steve Smith, assistant coach Jay Lenton was summoned in to keep wicket over two years after his last tournament match.

The Sixers won the toss and chose Adelaide to bat first after putting together an XI. Abbott then got rid of Matthew Short (6) and Travis Head (3) during the powerplay to leave the Strikers 21-3. Veteran spinner Steve O'Keefe (1-21) removed Alex Carey (1) in the first over.

Abbott then removed Matthew Short (6) and Travis Head (3) during the powerplay to leaving the Strikers 21-3. Meanwhile, Veteran spinner Steve O'Keefe (1-21) got rid of Alex Carey (1) in the first over.

In Philippe's absence, all-rounder Kerr was elevated to open and was the driving force for the first three-quarters of the innings, as the majority of the top order failed to get going.

With the Sixers needing 67 from 35 balls, Abbott walked in at No 6 and took over the mantle, smashing two fours and two sixes to keep his team in the match. Harry Conway (2-37) dismissed him on the first ball of the last over, and Ben Dwarshuis was run out without facing a ball as he returned for a second to keep Kerr on strike.

Kerr retained his nerve with 10 runs needed off three balls, launching a six over cow corner before ignoring the controversy surrounding the final delivery to smash the winning runs and ignite wild celebrations in front of a delighted home crowd.