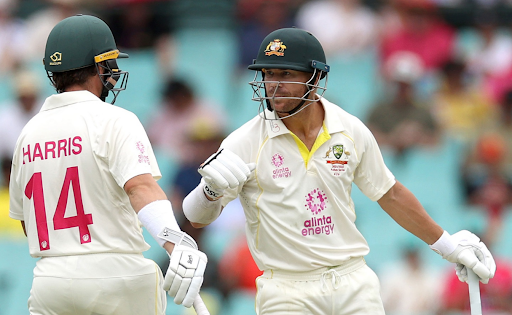 Ricky Ponting has endorsed David Warner and Marcus Harris to face the new ball on prospective subcontinental tours, and has advised Australia to resist the temptation to change their opening pair.

Despite being removed for the 13th time by Stuart Broad on the first day of the SCG Test, Warner is the current series' leading run scorer and has lately hinted that he may carry on until the return Ashes campaign in 2023.

This summer, the 35-year-old has found an opening partner in Harris, who followed up his Test-high 76 on a difficult MCG surface last week with a promising 38 on another seaming pitch in Sydney.

Neither of the innings was a maiden. Harris is anxious for a Test tonne, and while Ponting believes the left-hander needs to take a bigger step forward when defending, the former Australia captain believes they have the makings of a promising opening partnership.

Given that Warner's favoured opening partner last summer, the unfortunate Will Pucovski, is scheduled to make a low-key return in Victorian Premier Cricket this weekend, it's a significant endorsement.

In March, the Australians will embark on a three-Test tour of Pakistan, followed by a Test series in Sri Lanka later in the year before a looming Indian tour in 2023.

Ponting told the media that if Warner and Harris are firmly planted in the team, they will be the (Pakistan) tour's openers.

He commented that one thing he had noticed about very excellent international cricket teams is that they rarely have good opening hitters and even fewer have good opening bowlers. Ponting said that if they can get those two combinations just right and keep them locked in for a longer timeframe, they will be successful. He remarked that Harris now looks the part and appears to be gaining confidence, so maybe he gets a nice long go at it now. He added that playing cricket in such types of settings will be beneficial to his development as well.

Australia will probably encounter more slow bowling than they have since their previous Asian trip two and a half years ago. On the other hand, Pakistan may not be as receptive to spin as some may believe. The reason is five of the top seven wicket takers in the six Tests played there in recent seasons have been pacemen.