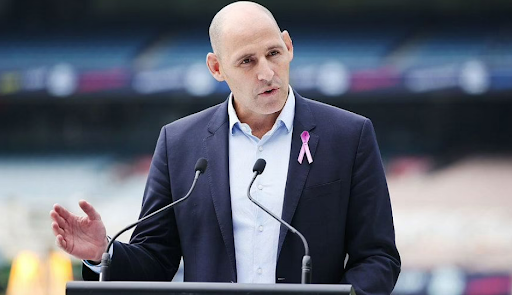 Cricket Australia (CA) CEO Nick Hockley tested positive for Covid-19 but has had no direct interaction with the Ashes team, the governing body announced on Monday.

Travis Head, an Australian batsman, tested positive last week and will miss the fourth Test, which begins on Wednesday in Sydney, while England head coach Chris Silverwood tested positive while alone in Melbourne on Sunday.

In a CA statement released to Australian media, Hockley stated that he obtained a PCR test as soon as he started feeling moderate symptoms, and it came back positive. He added that he has been isolating himself at home with his family and they have been tested negative.

The Covid-19 virus has made its way into the Ashes series, infecting players and support workers from both England and Australia.

Travis Head, an Australian middle-order batsman, tested positive last week and has been ruled out of the fourth Ashes Test. The match begins on Wednesday at the Sydney Cricket Ground. In Travis Head's absence, Usman Khawaja is most likely to receive a shot in the starting XI.

Meanwhile, opening batsman Marcus Harris was discovered in close contact with Head, and as a precaution, he has kept off a charter airplane transporting the squad from Melbourne to Sydney on Friday. Mitchell Marsh and Josh Inglis have been added to Australia's roster as reserve players.

The England squad, on the other hand, has been heavily impacted by the illness, with seven positive cases in the team, including support workers and family members.

Chris Silverwood, the head coach, Jon Lewis, the fast-bowling coach, Jeetan Patel, and Darren Veness, the strength and conditioning coach, were all infected with the virus. Graham Thorpe will be the stand-in head coach for the 4th Ashes Test due to a Covid-19 positive.

The fourth Ashes Test will begin on January 5 at the Sydney Cricket Ground. In the five-match series, Australia had an unbeatable 3-0 lead.