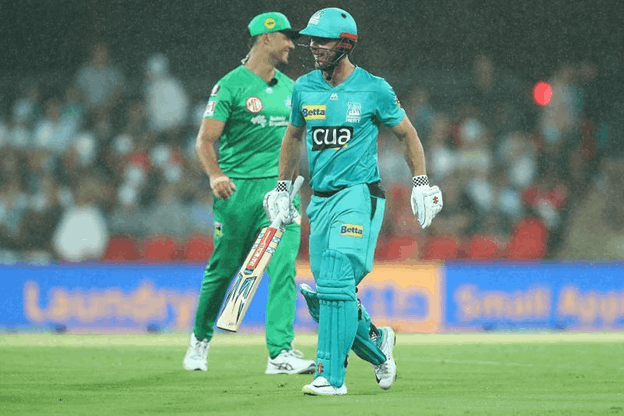 Brisbane Heat defeated the Melbourne Stars by 18 runs in a rain-hit BBL match. The game started as a 17-over contest, but it was reduced to a 10-over game after the showers continued.

In 10 overs, Chris Lynn, Max Bryant and Joe Burns helped the Brisbane Heat put up a daunting 115-3 total. A revised target of 129 was set for the Melbourne Stars but eventually fell short by 18 runs.

Chasing 129 in 10 overs to win, the weak BBL season of Andre Fletcher continued as he struggled to make the most of the two power-play overs.

Jack Wildermuth only gave away two runs while bowling the second over, and the Melbourne Stars never really recovered from that slow start.

After Mark Steketee and Xavier Bartlett had combined well on the boundary to take a relay catch, Mujeeb Ur Rahman dismissed Fletcher. Fletcher's 15 out of 13 balls were well below average in the circumstances, and Stars would rue that neither Glenn Maxwell nor Nicholas Pooran opened with them.

The Melbourne Stars were 52-1 after five overs and were well below the needed run rate of 15 per over.

Pooran came in at No. 3 and, as he smoked a massive six off his first ball, gave his side a glimmer of hope. Before top-edging, a short hop, the West Indies international smashed 16 off 5. To dismiss Pooran, who looked like he would take the game away from the Heat, Lewis Gregory kept his nerve and held a vital catch.

Glen Maxwell had no choice but to strike from the go, but the first ball he faced was caught at long-on. The Melbourne Stars were down and out after the Australian's dismissal.

As he hammered 23 runs out of the 9th over, Nick Larkin gave some resistance, but it was too little too late.

The Melbourne Stars had earlier won the toss and decided to bowl in the BBL tie first.

After a quiet first over, the Brisbane Heat got off on a flyer. As he smashed the Stars' new import, Haris Rauf, for 20 runs in the fourth over, Chris Lynn looked in reasonable control. The Brisbane Heat were 47-0 at the end of the power play, which was the best spell they've had in this BBL.

When he was inserted into the attack, Adam Zampa put the brakes on the scoring. In his second over, the leg-spinner picked out two wickets and was even on a hat-trick at one stage. Max Bryant (31) and Joe Denly were dismissed by him (0).

Owing to the heavy downpour, the game was stopped with 7.4 overs gone and was subsequently further reduced from a 17-over match to a 14-over match.

Right after the restart, Lynn smashed two sixes off Maxwell before the rain once again caused an interruption, allowing the game to be reduced to a ten over the affair.

Maxwell had the last laugh after the second restart as he cleaned up Lynn, who left after managing 48 off 23 balls.