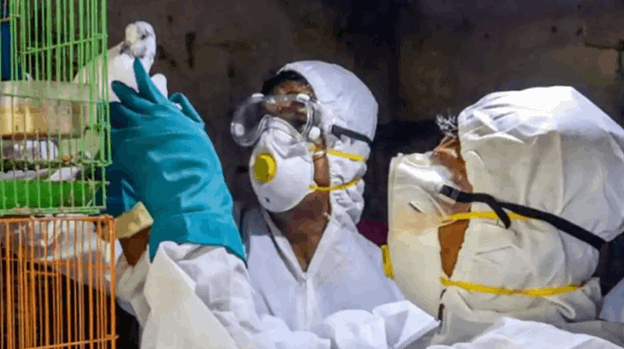 Bird flu has been revealed as a state-specific disaster in Kerala. A high level of warning was issued following the confirmation of an outbreak of bird flu in some parts of Kottayam and Alappuzha's districts, the Kerala Government said.

State Animal Husbandry Minister K Raju said that at least 50,000 ducks would be killed to contain the virus's spread and that the government would reward farmers. According to sources, the state government issued a high-level warning in the state considering the virus's ability to infect humans.

On Monday, the state government ordered the slaughter of ducks, hens and other domestic birds in and around a 1 km radius of the affected areas after tests conducted at the National Institute of High-Security Animal Diseases in Bhopal reported the outbreak of bird flu.

In Himachal Pradesh, some 1,800 migratory birds, most of them bare-headed geese, were found dead in Pong Dam Lake's sanctuary. In Rajasthan, more than 170 new birds were killed in some districts on Monday, raising the total number of fatalities to more than 425 in recent days. Bird flu is a highly contagious and severe respiratory disease in birds caused by the H5N1 influenza virus, which may sometimes infect humans.

Meanwhile, the alarm was sounded after six UK returnees to the state after 14 December tested positive for the latest coronavirus strain, including two in Kozhikode and Alappuzha, and one in Kottayam and Kannur, officials said on Tuesday.